The pride of Dauphin, Lieutenant-Colonel W. G. (Billy) Barker, V.C. is known as one of Dauphin's earliest families and Canada’s most celebrated heroes of World War I. Gallantly serving as an ace pilot, Barker’s reputation gained him international prominence. On his last day of duty Barker fought a combat mission which has become legendary in the history of air warfare. High above the lines he shot down one enemy machine, but was set upon by formations of approximately 60 Fokkers. His heroic combat against such heavy odds won Barker the Victoria Cross as the culmination of a brilliant career.

In honour of Barker, the Dauphin Municipal Airport was renamed the Lt. Col. W.G. (Billy) Barker, V.C. Airport and commemorative statues appear inside the airport terminal building and in CN Park in downtown Dauphin.

This airport was originally constructed as part of the British Commonwealth Air Training Plan (BCATP) and served as the No. 10 Service Flying Training School between 1941-1945. Post war, this airport has provided Dauphin's air traffic needs. Also, as part of the BCATP, the No. 7 Bombing and Gunnery School was built at a location 8 miles east of Dauphin in the Paulson District. Together, these schools trained over 9,000 Airmen as a part of the WWII efforts. The military history buff will find no shortage of information in Dauphin!

On August 27, 2022, a Commemoration of the two BCATP Schools was held, and two large granite monuments were erected at the Lt. Col. W.G. (Billy) Barker, V.C Airport. 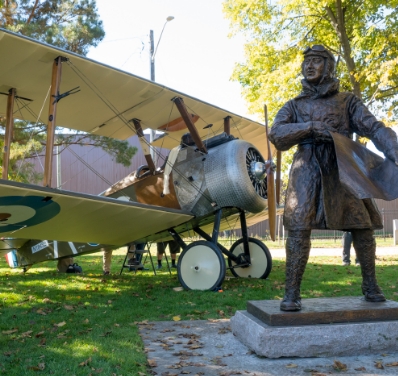 Take advantage of our surprising array of cultural influences, attractions and activities